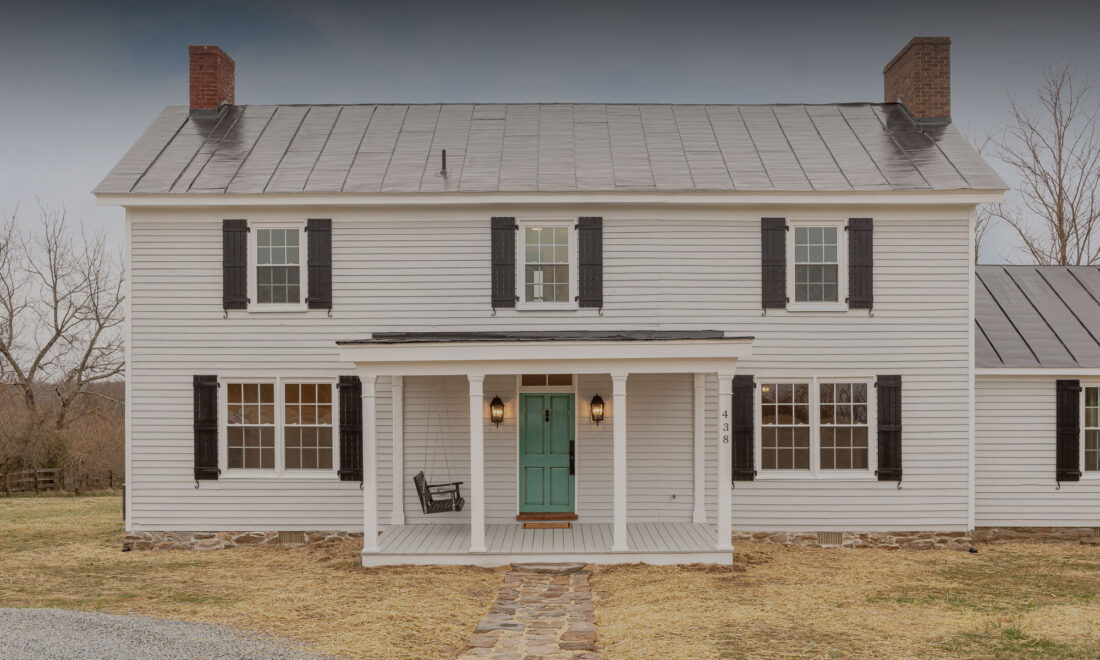 What a fun project this was! Built in 1850, this historic farmhouse was loaded with original charm. It was supposedly an infirmary during the Civil War, then a Boys and Girls Club, and later the home of a movie star. It hadn’t been lived in for quite some time and was in need of some serious upgrades.

There were vines growing in most of the rooms, birds had built their homes inside, there was no drain field or well, no HVAC system, and nearly zero plumbing or electrical. 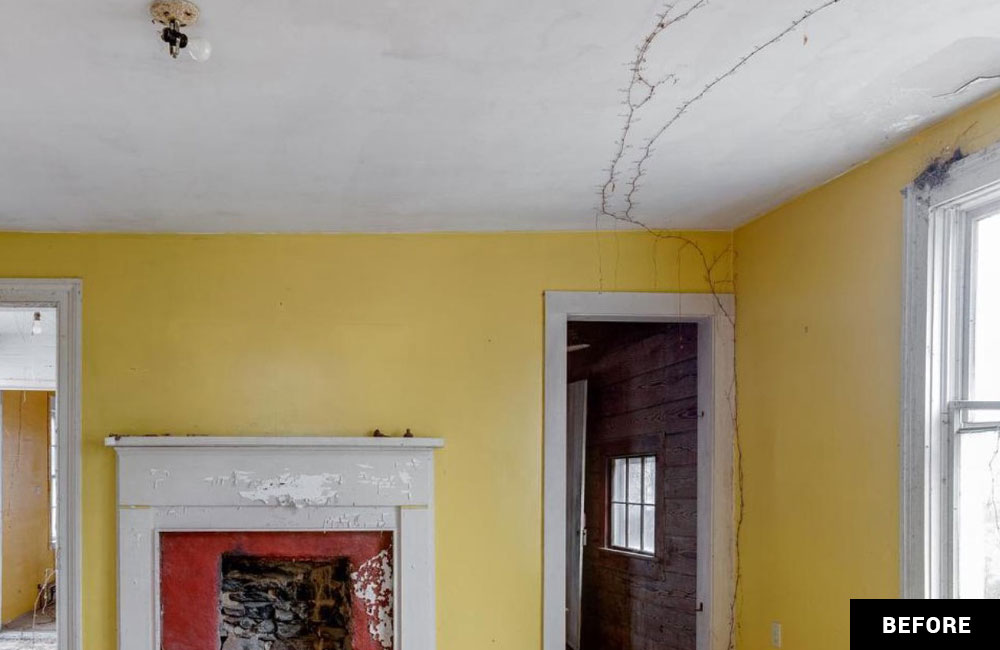 The first time the team met Andrew at the house during the study period, they thought they were at the wrong address. Seeing the amount of work required, they thought, “it couldn’t possibly be this house.”

Every investing “how to” book would advise the reader to stay away from a project like this. You have to be very precise with your numbers and know exactly what it will cost if something goes wrong. And of course, the more work that you undertake on an extremely old house, the more likely it is that you’ll run into unplanned problems.

Andrew was advised not to do it, but after calculating dozens of possible scenarios with various problems, the numbers seemed very doable.

What was so enjoyable about this renovation was the creativity required to really turn it into a livable home. The existing structure had zero flow to it and the rooms were very chopped up. There was no primary bedroom, no primary bathroom, and the existing kitchen was in a very peculiar part of the house. 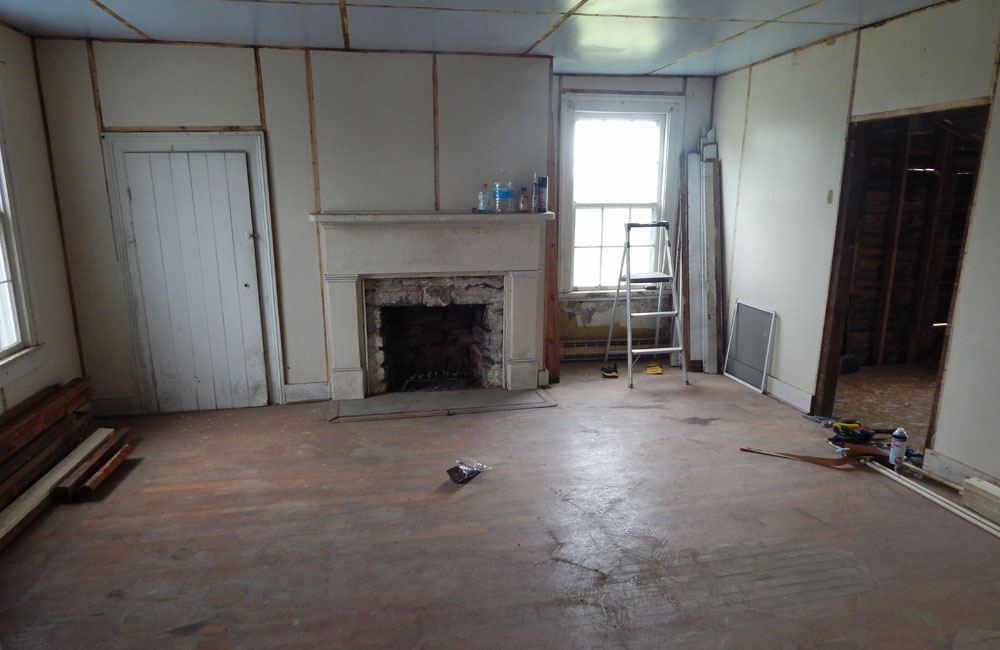 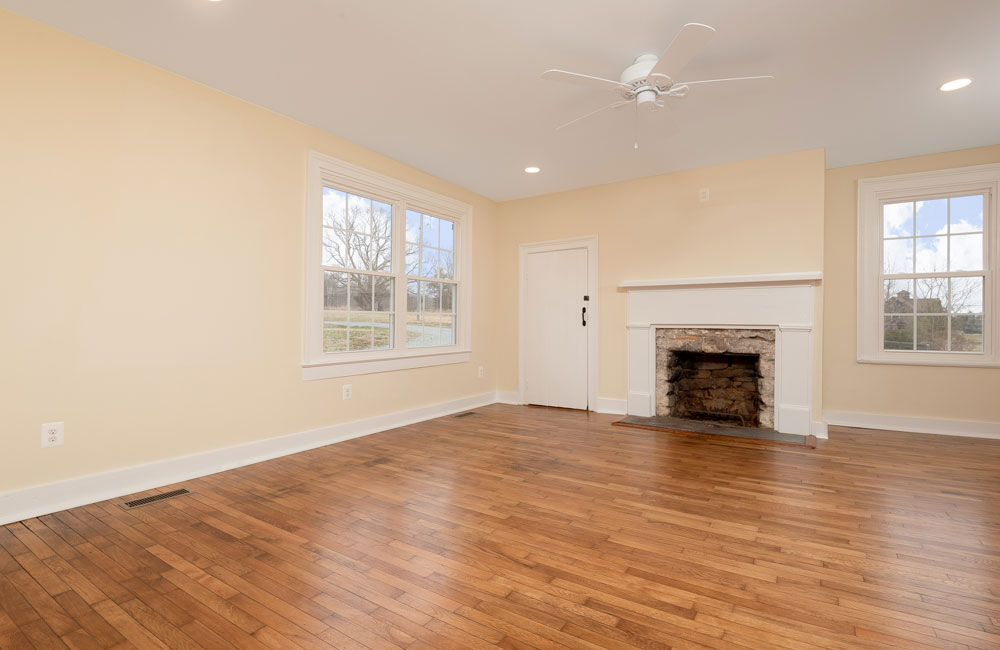 Restoration does its own design work, so this was essentially a blank canvas from which to work. Let me take you through some of the thought process…

We needed to create a more modern and open concept, so one of the first things we did was to remove the wall to the left as you first entered the house.

This immediately resulted in a much more open feeling and walking into the foyer from any part of the house no longer felt like a narrow tunnel.

This immediately resulted in a much more open feeling and walking into the foyer from any part of the house no longer felt like a narrow tunnel.

The next objective was to create a grand kitchen in a much better location. There was a small bathroom tucked into a strange corner of the house.

There were two rooms next to it that both had tall, unique wood ceilings. 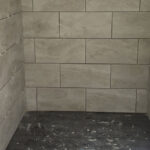 Hmm, could we somehow make this the kitchen by combining these rooms? It’d be a great location and the ceilings would be perfect for a farmhouse kitchen.

The hope was that the bathroom had the same ceiling as the other two rooms once the drywall was removed. Sure enough! The same high pitched wood ceiling was uncovered. After removing a few walls to combine all three rooms, the new kitchen was born.

We installed a new large window in order to give the sink a nice view out to the peaceful country setting.

One of the team members found old wood boards while working in the attic one day. They were in usable condition and most likely as old as the house itself. What a great idea to use them for the kitchen floor.

The finished kitchen included high end frosted glass cabinets, a large stainless steel farmhouse sink to match the appliances, pendant lights from Pottery Barn, a wine bar with a second sink, and a butcher block countertop perfect for the farmhouse.

We now had to figure out where the primary bedroom and bathroom would go. The OLD kitchen was tucked away in the back corner of the house. We decided it would make the perfect primary bath, especially since we could tie into the existing plumbing.

And it just so happened to be located next to a large room that had a cozy fireplace. Boom. Primary bedroom.

This room flowed into a very unique natural wood room in which we created a coffee or breakfast bar, equipped with a beverage cooler and sink.

The bathroom was large enough to fit a soaking tub that sat in front of a window with a lovely view.

We installed a new window to let in more natural light, built a walk-out deck, created a private nook for the commode, and installed a new large 60’ vanity. AND. The room was large enough to fit a massive shower with a rain shower head that became the centerpiece of the bathroom.

One glaring weakness was that the first floor didn’t have a half bath for guests. We took an area that had been a screened-in porch, closed it in, and created a powder room. We also added a laundry room in this space. It was centrally located and the perfect place!

We now had a 2 bedroom, 2.5 bath house. Better, but not nearly good enough to accomplish the high market price and subsequent profit that had been planned.

There was a section upstairs that had one large abnormally shaped room with no closets anywhere (It also had some very strange bee nests).

We framed a closet in each and created walls so that they became two separate and distinct rooms separated by a hallway. Ok, now we had 4 bedrooms and 2.5 baths. Getting there…

One of the best design decisions was to convert the unfinished attic space (approximately 400 square feet) into an additional bathroom. It was located off the back of one of the bedrooms we had just created and would transition the entire space into the perfect guest suite because of how it was privately tucked in the back of the home.

So we now had a 4 bedroom, 3.5 bath home with well over 3,000 square feet on nearly 8 acres. It had incredible charm with 200 year-old original hardwood flooring, modern amenities, a brand new drain field, three decks, a large and unique kitchen, and quite the primary bath.

The vision when we first started had been accomplished.

The home sold immediately before officially hitting the market for $759,000 in April of 2021. Quite the project. Quite the profit. This was one we’ll never forget!